“Submitting a manuscript to a traditional publisher is like sending a letter to Santa Claus.”

This comment, made by my husband, hit the mark so close that I had to pass it along. It made me chuckle, and then sigh.

About eight years have passed since Amazon opened up Indie publishing through Createspace and Kindle. I remember asking, “What kind of name is that?” Thinking back, it burned the traditional publishing industry pretty hard.

How has everything changed? If you like hard data, here’s the link to data guy’s author earnings report, complete with pie charts and spreadsheets. It’s quite fascinating. Print books still sell the most in total dollars, stronger than other formats due to the inclusion of textbooks and children’s books.

Science fiction is fourth in dollar revenue for ebooks behind literature, thrillers & mysteries, and romance.

Data guy shows how many books customers are buying and what price points sells the most.

Also interesting for marketing was the seasonality question. Undoubtedly, print books are seasonal. They sell most in… surprise… August and September. (Textbooks) However, most interesting was that ebooks sold the same every month no matter what the season.

Hmmm… I wouldn’t have guessed that. I still sell better in summer, but then I do more marketing at that time.

There are spread sheets that show the top selling publishers by book units and revenue and name the best selling authors in ebook, print, and audio. In some cases, names are named, but not in all. Indies appear to be shy, and almost half asked to be blanked out.

For the complete report, go to:

All right. So maybe numbers bore you. How about cute monkey faces? Remember I mentioned a cloning factory in China in one of my blogs ages ago? Well, the Chinese have cloned a pair of non human primates called macaques, using the Dolly sheep method. For pictures of adorableness, follow this link: Then wonder if any humans are in their queue.

Because I was negligent on reading Angel City Blues by Jeff Edwards last year ( hey, this is a flexible list), I decided to start with that title this year. 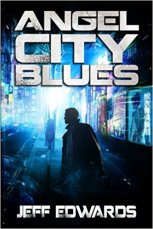 This is an urban punk detective mystery that is a fun and thoughtful read. Detective David Stalin, down on his luck and living under a dome in the dangerously poor section of L. A., lives with a highly developed A.I. Saving his life, cooking his dinner, and guarding the slovenly flat, the A.I bickers constantly with David while attending to his needs. I loved their interaction. David gets a case from a wealthy woman to find her missing daughter. There’s no DNA, no motive for her missing, no record of what happened on any security camera, and a belligerent LAPD feels he is trespassing on their case, even though they are at a dead end.

His client, however, can pull strings and cover any expense. Tempted, David takes the case, which leads to virtual reality snuffs. Here is a dirty little area of criminal activity where our detective soon finds himself secured into a helmet and thrust into a world of death and danger from which he cannot escape. He is tormented, warned, and finally released. At least, the first time. Undaunted, David continues to follow the case, which leads to an orbiting space station and the organization behind the girl’s disappearance. An exciting conclusion pushes the technology boundary even further and will delight most any techno geek.

In this novel, Edwards explores the danger of high tech used for criminal activity. With our society on the verge of adopting virtual reality for more than Pokémon games, Edwards asks us to consider what genie we may be letting out of that bottle. Even greater is the risk of using nanotechnology. He offers a scenerio that will chill you and lead you to hope that cutting-edge scientists know what they are creating while making you mindful of the threat certain technologies might bring us.