I have been asking myself lately whether enrolling in Amazon’s KDP Select was worthwhile. I know of writers who swear they sell more on Smashwords or the iBookstore, but for me Amazon sells more, hands down. I kept two of my books up on Smashwords just to compare as my ads reach all platforms. Sold two this year compared to hundreds on Amazon. That’s an enormous difference. However, I have noticed in the last three months that my Kindle Unlimited and Kindle Prime sales are starting to compete strongly with my standard retail sales.

Bear in mind that a recently broken shoulder caused all marketing efforts to dramatically halt. Now I’m in restart mode and evaluating past efforts. The question becomes: “Would those sales have happened, or would they have gone to someone else if I hadn’t been on KDP Select?”

Sales on KOLL are dependent on what Amazon puts in the kitty and over time have averaged around $1.62. My usual royalty is around $2.75 or more. Am I winning or losing with this strategy? That’s why Nicholas Rossis’s blog that interpreted Hugh Howey’s author earnings was so interesting. (See previous blog for Howey’s link). Rossis states that Indie author’s using KDP Select earn 13% more and with KOLL, Amazon is providing incremental earnings to Indie authors. Yea!

Check out his interesting blog.

For June, I’m experimenting with Book Gorilla and have scheduled an ad for June 15th when Caught in Time will be offered for $.99. The special will run to June 20. I’m hoping to catch those readers who are looking for an adventurous time travel summer read and are stocking up their Kindle, iPad or Nook now. 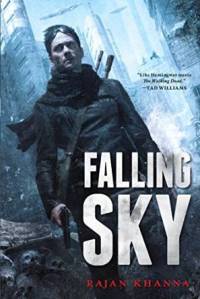 This week I am discussing Falling Sky by Rajan Khanna. This book came into my hands through my Science Fiction Book Readers that meets once a month at Powell’s. Before each meeting, Peter passes around Advanced Reading Copies (ARCS) and various books he has on hand that he thinks we might like. I grabbed Falling Sky because of the cover. And it was free.

Also, I was looking for an unknown current author to present to my blog readers who might be a diamond in the rough. In addition, Khanna mentions that the seeds of the story started at Clarion West in 2008 (near me) and his teacher there, my friend Mary Rosenblum, suggested his short story be turned into this novel. So I had an interest in seeing if he suceeded .

Falling Sky is a post apocalyptic near future that takes place in North America where a disease has turned humans into little more than rabid beasts called Ferals. Ben Gold has managed to survive by taking to the air in his family’s airship, scavenging abandoned buildings and homes for food and supplies while trying to avoid Ferals that roam on the ground. The danger is that contact with any infected human fluids transmits the disease, causing that person to become a Feral.

Air colonies have formed to protect those uninfected humans from those on the ground, but air pirates raid these colonies scavenging for food, weapons and goods. Ben discovers a group of scientists in one colony who are searching for a cure, and one, named Miranda, attracts his attention. But then an attack loses Ben his airship, and he has to fend for himself on the ground among Ferals. He vows to go after the pirates to reclaim his ship, but Miranda comes back into his life, and he has to decide whether to help her or go it alone.

Recently I have noticed a lot of Apocalyptic science fiction coming out. For example, MADD Max: Fury Road is showing in theaters. That kind of genre is not my usual fare, but the flavor of Steampunk percolates through this story making it palatable.

The writing is very readable and the story contains a lot of action as airships soar over deadly ground, trying to survive in a world overrun with human savagery.