For whatever reasons, my most recent marketing program exceeded expectations. Many authors had been grumbling that free doesn’t work as well anymore…that ebook libraries are bursting at the seams with free books…And my previous marketing attempt seemed to indicate that might be true.

But if I still see an interesting free book, I grab it.

And if I like it, and there’s more by that author, I’m willing to pay a certain price for that reading experience. (See previous blogs)

Several readers did just that, buying up my whole series in some cases.

The key is finding a way to get your name in front of readers so they can sample your writing…get to know you.

There are a variety of “free and discounted” book websites that charge the author for displaying his/her book. The cost to the reader is giving out his email address. That’s all.

The cost to the author varies depending on the effectiveness of the website with Bookbub leading the pack. However, there’s a price to pay for the author and hurdles to leap because of their popularity. I did find that the cheaper sites are most often less effective. You get what you pay for. So you have to find a balance.

Why was this program more effective?

I think timing played an important role. Lucky for me, I didn’t realize that a winter storm was coming in to strand a large number of people in their homes where they had more time to read.

Having said that, a lot of the books sold were out of the U.S.A. Sold three in India for crying out loud. And to my Canadian readers… many, many thanks!

Readers in the U.K. are the second largest market (after U.S.A.) but also Germany, France, and Japan sold.

Also, I saw my numbers spike when I advertised on Freebooksy. An earlier website was cheaper, but sold very little even though they put out a lot of tweets. The tweets didn’t translate into sales. So that was interesting.

If you have a compelling cover and a blurb that intrigues readers; it’s key.

So, I am a supporter of Amazon and their marketing efforts because I would probably be selling a lot less without their various programs. 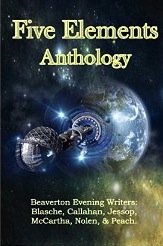 Recently several writers in my group have won awards for their short stories. They are quite good at it. So in a moment of insa…enthusiasm, we decided to all write a short story. Then, some wise wit suggested each member offer an element to include in the story. We went around the table. I sagely suggested putting in an alien; others suggested a spaceship, a ghost, a conflict with a boss, and then Chelsea grinned and added a fireplace poker.

Now short stories are not my strength, but I actually had fun writing mine. Be forewarned, there is a strong humorous component in it. As a result we came up with seven amazing stories that we have put in an anthology called the Five Elements Anthology.

You can easily get the anthology on Amazon. Just scroll down a bit since Five Elements is a popular name. You’ll see my name and the rest of the group on the dynamite front cover.

We’ve sold two already in England along with a number in good old U.S.A.

Writing a short story was so much fun, I might try another one and offer it as a special for my website readers. Stay tuned.