Everyone likes a sneak peek.

So, I’m giving my readers of this blog only an advance squint at my new cover. It is so hot off the press that you might burn your fingers.

Oh, no. That’s right, we’re digital. Your fingers are safe.

Anyway, I’m in the throes of birthing my next book in my Terran Trilogy series called Somewhat Alien. I spent the week working with cover designer Toni Boudreault to get the look I want. 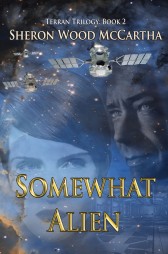 There’s a lot to think about when doing a cover. It has to be artistic, the fonts large enough to read in a thumbnail version, and it has to suggest a story that invites the reader in. This time I’m experimenting with two faces on the cover. This is to let the readers know that there is a relationship arc in the story. I include ships, space stations, and time travel for the more hard science readers, but have added cute rodent-like gebbits that stir up all kinds of mischief on the space station. Then, I throw in a recent controversy concerning immigration. After all, the main goal of the story is for the Terran aliens to land on the planet Alysia, and the native Alysians are less than welcoming. There’s a flavor of the recent headline news in the story.

In addition to that, details on the faces like the correct hair and eye color have to be checked. I have an art background and worked in an art gallery for eight years along with painting oil landscapes. You can see my work behind a few of my blog pictures. So, this is one of my favorite parts of this whole author gig. Toni handles the dpi and megabytes, along with a professional designer’s eye, while I make comments on the look and subject matter.

Next, I’m waiting on several Beta readers to report back. Already, Cathy has given me some great suggestions that I plan to implement in the story. I’m at the final tweak stage with  changes still happening.

So stay tuned. Launch will be at the end of June.

This week, I’m presenting Saturn’s Run by John Sandford and Ctein. This is a good story that includes science so hard that you could chip a tooth. So if that’s your flavor, here’s the downlow.

Sanders Heathcock Darlington’s father is filthy rich, and in two years at the age of thirty, Sandy will inherit. Right now, however, thanks to dad, he works at the Caltech Astrophysics Working Group headed by Dr. Edward Fletcher, who is coming to regret the hire, no matter how much money daddy has promised to donate to the school. Surfing is Sandy’s current hobby along with playing guitar with a girl band called the LA Dicks. Often dressed in shorts and t-shirt, his make-work job is to double check one of the telescopes with a human eye and, if anything looks amiss, to pass it on to a Real Scientist who would evaluate the findings. The fact that he constantly scans his environment and flinches at unexpected movement as if expecting a sniper nearby, escapes most people’s notice. Still, he has a dark side to him that smart people sidestep.

Arriving at work late again, he just puts up his feet when the computer pings a critical anomaly. Close inspection reports an object decelerating, emitting hydrogen, with rich uvs approaching orbit around Saturn. A second computer check reports the same findings with a 99% chance of the object being real.

Fifteen hours later another meeting with the same group and a scary, dark-eyed man from Washington confirms the object is an alien ship. Fast forward to the oval office and President Santeros with eight select people, including Fletcher and the thin, dark -eyed man.

From there the story becomes a political race since the Chinese are readying a launch to Mars. Not wanting another country to get their hands on advanced alien tech, the American military and scientists advise President Santeros to convert the current International Space Station to a spaceship in order to beat the Chinese to Saturn. Unfortunately, the Chinese telescopes discover the alien ship and frantically begin to transform their Mars ship to a ship capable of reaching Saturn.

And the race is on.

Here Sandford involves the reader in some heavy science, discussing the ion propulsion engine, the various trajectories, needed space requirements and so forth. A frantic search for crew brings in an interesting cast of characters, and the ticking clock as the Chinese head to Saturn amps up the tension.

President Santeros’s security head, named Crow, knows ultra secret details about Sandy and urges the president to include him in the crew. Sandy is recruited as their cinematographer who works with a beautiful hard-assed reporter determined that this will make her an ultra star as they record every aspect of the journey.

Sandford does a nice job bringing in interesting people, then throwing a mole into the crew. While doing their main job, Sandy and Crow try to work out who is leaking vital information to the Chinese. A section also shows the Chinese crew and their problems as they race toward the aliens in a totally different style of ship. Technical details included.

Without giving away too much, Sandford also offers a reasonable answer to what they both eventually find.

If you can gloss over the extensive science explanations that show up in lumps, you will enjoy this story. If you are a science geek and have passed over my recent offerings of fantasy with werewolves and vampires, then this one is for you.