Tag Archives: Surviving on another world

Mars and The Martian

I figure you must be almost as frantic as I am coming down the holiday home stretch. Overwhelmed with things to do and vowing not to nibble that second Christmas cookies or sip the third eggnog, (So yummy) I am noticing the pounds climbing alarmingly upwards on my scale.

Or maybe you’re one of those cool-as-a cucumber types that has it all under control and smirk as we last minute shoppers scurry about.

Either way, I’m offering a quick, cheap idea where you don’t have to pay postage or even leave the house and get mired in insane traffic. If your gift is a mobile device…Kindle, iPad, iPhone 6, enhance the gift with a few interesting free books. Start with Cosmic Entanglement, which is being offered free 12/22 through 12/24 and also 12/26 through 12/28. A limited time offer, it’s one of my favorites, and although third in my series, it can stand alone or be the first one you read.

With time travel, you have that flexibility in your stories. This one is not heavy science…more of an Enders Game with a touch of James Bond. For more science in the area of space travel, Past the Event Horizon would be the choice. Even so, in several places I stretched the known rules of physics to support the story because, hey, we are learning new things about space every day. Yesterday’s speculations are today’s reality.

To find other special offers, goggle for free books and a number of websites will pop up with a vast array of free and discounted books. 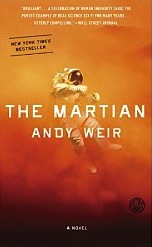 So, I am halfway through The Martian by Andy Weir. The story is basically a Robinson Crusoe on Mars told through first person using a journal. So, I don’t know if he survives or we’re just reading a left behind journal. That keeps up the suspense.

Weir has a very personable voice. The reader feels like the writer is just leaning over a cup of coffee and telling his tale. For example he writes:

“The most important piece of the advance supplies, of course, was the MAV. The Mar ascent vehicle. This was how we would get back to the Hermes (orbiting ship) after surface operations were complete…

You can imagine how disappointed I was when I discovered the MAV was gone.”

What follows is the attempt to survive for four years until the next mission is due to arrive. For those that like hard science in their science fiction, the story will satisfy.

Understandably, there’s not much romance or personal interrelationships. Not even a volleyball with a face to talk to. But the left behind astronaut, Mark Whatney, does reveal the roller coaster of emotions from despair to hope to brilliant problem solving.

There’s a lot of chemistry as he tries to create water for his plants, but he spares the reader the heavy math.

It’s a book that I put down after awhile, but then, I picked it back up to get a feel for what it might be like to live in such a different environment as Mars. Just a quick note that the reviews have nearly 4600 five star reviews, so a lot of people really like this one. 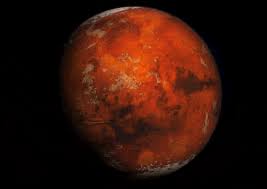 Currently there are several experiments that address what it might be like to survive on Mars. Last year I wrote a blog that carried a link to David LeVine’s gripping experience in a habitat that attempted to recreate conditions that might be found on Mars.

Mars is getting more and more notice as we gaze past the moon to what might very well be the next planetary body we visit. This book gives you a realistic taste if you can’t afford the ticket.