Persistence: a Good trait for Authors

Persistence can be very powerful.

Over twenty-five years ago, I began writing a book. At times I had a day job, at times I was a busy mother, but on weekends and during odd moments, I would write. And when I wasn’t writing, I was imagining. Occasionally, I would submit my story, but as I kept on writing, I built a body of work that I hoped someday might be published. Nonetheless, having the stories was reward enough at the time.

It’s often easy to quit. As they say, “I’ve done it many times.” But the lure of a story would eventually bring me back to my writing. I also had a number of fans who encouraged me… so that helped.

Why am I blogging about this? Because recently I noticed that Andy McKell frequently posts a “like” on my blog. The notice would show up in my e-mail, I’d see his smiling, rugged face, and after a time, I would say to myself, “Ah, there’s Andy again.” He didn’t hype his work, he didn’t push for me to review him, he just put a like on my blog.

More than a year went by, and one day I saw somewhere, I think on an ad site, a book by Andy McKell. By now you may have realized I catch on slowly, but I eventually get there. So, I downloaded Faces of Janus by Andy McKell onto my Kindle library. The blurb made it sound interesting. 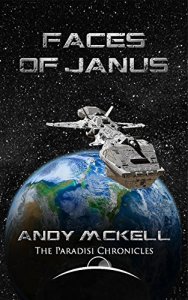 And there it sat.

Why? Because I had eagerly started out reading various Indie scifi books and soon became discouraged by the poor formatting, awful grammar, and rambling storylines that I too often found. I got caught in the dilemma of helping out new writers while offering an honest opinion to my bloggers. For you see, I wanted to suggest books in science fiction on my blog that excited me, that I knew others would want to read, but hey, I didn’t want to reject a sensitive new writer. Our stories are our children. We care what people say. We’re vulnerable to criticism. I didn’t want to be that person.

So I announced that I would no longer do review requests. Many new authors are under the impression that because they offer their work free, readers will do backflips of joy and be thrilled to receive their free and wonderful book. But it takes time to read and then write a review… lots of precious time. And often the books were lacking.

So Andy’s book languished in my library while I read hot new books from those top ten lists often promoted by traditional publishers. To be fair, many turned out great.

And then there was his smiling face again… persistence. Another “like” showed up.

Another one that led me over to his website, which had become even more interesting since my last visit. I decided to open his book and give it a try.

Lo and behold, I’m enjoying it. I’m glad—because without us exchanging a word, I think of Andy as a friend now.

Corporate power. Corporate betrayal. In the last decades of the twenty-first Century, the wealthiest, most powerful families on Earth are constructing ten vast space ships. Their stated mission is to travel to Mars to escape a failing Earth.

But everyone carries a secret. Jason Janus, son and now living heir of the original founder of J Corp, leaves on a multitude of unknown trips. One of his top executives and reluctant lover, Angel Flores, takes on a side lover due to JJ’s many absences. Meanwhile, Zag Bishop, her new love interest, hires Katya from a work auction to be a Guardian at J Corp due to her fighting skills and tough attitude. But she has a secret background she must hide and lives in fear of being found out.

Angel and Zag begin to put together leaked and stolen information that suggests the ships’ true destination may be altogether different than announced. The plot thickens as the ships leave and the world wakes up to the fact that they are not headed to Mars, but somewhere totally different.

A near future story of corporate espionage, secret lives, and desperate lies make this one I should have investigated sooner.

But, persistence paid off, and I’m enjoying it now.