One theme sparked by current science discoveries is the search for new habitable planets. Thanks to the Kepler mission, scientists are now sorting through hundreds of possible candidates for a new Earth.

Interestingly, our scientists are sending robots first to investigate other worlds…just like the alien robot that crashed onto my world of Alysia.

Hmmm. Maybe it came from Earth?

Because that’s what we’re doing now on Mars.

Nanobots is also a current theme. I sent a link two blogs ago on remote control miniature robots. One of my favorite scenes in my forthcoming novel Touching Crystal (out in November 2013) concerns saving two hostages using remote controlled flying nanobots. 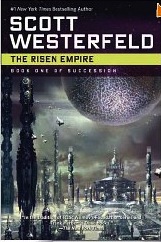 Scott Westerfeld has a great scene in his Risen Empire that also does this, only he sends in a horde of nanobots and you don’t get to sit in the “cockpit” with  Richard Steele like my readers do in Touching Crystal.

Several recent novels by well known prolific writers touch on the theme of robots that are self-replicating and can reconfigure themselves into whole new forms as their environment changes.

Self replicating nanobots are the source of possible world disaster in Larry Niven and Matthew Harrington’s new novel The Goliath Stone.

The Briareus mission took nano machinery out to divert an Earth crossing asteroid and bring it back to be mined, but things go wrong and nanobots go wild, creating a whole new entity that threatens Earth. 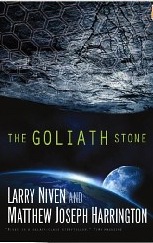 Dr. Toby Glyer, is the genius behind the nanotechnology and uses it to effect miracle cures on Earth…long life, disease free humans with strong libidos. Now he must find his partner, William Connor, and stop the incoming danger.

While the concepts and technology of this novel were intriguing, the dialog and action bogged me down.

A lot of sitting around and guessing what game the elusive William Connor played. 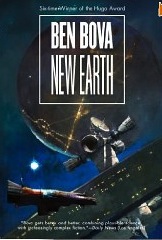 Well known and prolific writer Ben Bova just came out with his newest in a series called New Earth. He uses both the theme of discovering habitable planets and medical nanotechnology that enables health and long life.

Of course, everything gets carried much farther than current technology.

Like Niven, he ascribes a dangerous element into his nanobots, but does not ban them from Earth like Bova does.

Maybe he should have.

In both, the current themes and science are interesting, but the writing could have been better and more engaging.

In Bova’s New Earth, a long term exploration ship is sent to an exciting new world that appears habitable for humans. While the eighty year trip to New Earth takes place, the passengers are put in a cryogenic sleep, unaware of a global warming crisis on Earth.

Here is another current theme much discussed nowadays…global warming.

In the story, global warming has caused Earth’s cities to be inundated and weather to shift. Economies are on the brink of disaster.

A global weather shift is also a theme I use in my forthcoming novel, Touching Crystal, but that event is caused by a destructive comet.

Several popular movies, Deep Impact and Armageddon  in 1998 portrayed how we might respond to an advancing asteroid or meteorite. Recent asteroid activity and the crash of a meteorite in Russia has reignited this theme. (See Feb. 2013 blog)

In the novel New Earth, the political leaders choose to abandon the expedition in order to attend to their own world crisis.

The expedition lands and discovers highly advanced friendly aliens that carry human DNA. The natives claim to have been born on the planet, which turns out to have a hollow metal shell. They deny having interstellar travel capability, but insist that they are human. Everyday technology is highly advanced, yet no cars, or manufacturing are visible. Nothing adds up.

The Earthlings are suspicious and the exploration team divides into several factions. The main character falls in love with one of the human appearing natives and trusts their leader’s offer of friendship. Other factions in the landing team mistrust the natives. They continually warn that the natives have ulterior and dangerous motives. The story sets up a nice conflict among the two groups as to who can be trusted and what motives drive both humans and aliens.

While parts of the story bog down a bit, Bova throws in a surprising twist towards the end, which keeps the reader flipping the page.

For me, what carried the story were the interesting dynamics of psychology: from the world leader abandoning the expedition for his own local concerns to the whole exploration of the human psyche and how various individuals reacted to first contact.

Humans can be a bit paranoid when confronted by new and unknown things…and aliens, well, who knows whether they can be helpful friends or world destroying enemies?

I have now reached a timeline in my Alysian series where I have to peer into the future for what tech might be current in my stories.

At best, it’s a guess…but an informed guess, as I investigate a lot of the interesting science research going on currently.

Check out Ray Kurzweil’s newsletter for what scientists and researcher are now working on. http://www.kurzweilai.net

In my current novel, Touching Crystal, out in November, (fingers crossed),  I use micro robotics to enable a rescue of two kidnap victims that are being held on one of Alysia’s moons.

This was a fun scene to write. So, imagine my delight when last week the newsletter came out with an article on current research in this field.

There’s also been a lot of talk about discovering Earth-like planets with the recent Kepler Mission that wants to find “Goldilock” planets habitable for humans.

This was a theme in the most recent novel by Ben Bova called Farside.  I had not read much Ben Bova, and especially not recently, so this struck my fancy.

Ben Bova is a six time Hugo award winner, former editor of analog, editorial director of Omni and past president of Science Fiction Writers of America.

So, worth a mention.

How could I lose? 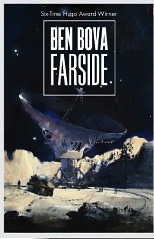 Farside is located on the side of the moon that never faces Earth and therefore is an ideal location for building an astronomical observatory. Telescopes on Earth have detected an Earth sized planet circling a star that is less than ten light years away…but is it habitable? Is there an atmosphere? Can it support life?

But building on Farside is a dangerous undertaking. An airless surface, constant bombardment by radiation, 270 degree temperatures, incoming micrometers…

And those are the easy challenges…

Competing jealousy, a chief researcher who is hell bent on winning a Nobel prize, tangled politics, love and murder all up the ante.

Someone lets loose dangerous nanomachines that used in the body can make one immortal and protect against radiation and disease, but if configured another way they eat through certain metal.

And on the moon that can be extremely dangerous.

I found this particular story one that I really wanted to enjoy. It had all the elements in it, but I had a hard time believing some of the characters or getting involved. I did find myself rooting for the plodding Grant Simpson, the construction engineer who does most of the work, but is considered just another “grunt” by those he serves.

I found it hard to believe the chief of research and leader of the project could be so obsessed with winning a Nobel prize that he was willing to jeopardize his project.

And I found the writer and editor in me trying to analyze the writing. Bova writes smoothly, describes adequately, but somehow the characters felt like they were being moved around on a game board that had an obvious ending.

Still, I do want to introduce Ben Bova because he is so prolific and has won numerous awards for his writing. 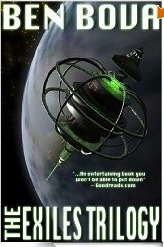 Two other novels that got higher reviews were The Exiles Trilogy and Star Conquerors. 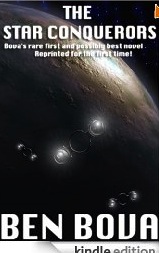 I might give him another chance and read one of these…and report back. Anyone else out there have an opinion here?