What if the next step in human evolution is not crafted by Mother Nature, but birthed from our own science labs?

If you follow Ray Kurzweil at all, you know there are amazing things happening in science around the world.

We are already on the path to Transhumanism.

My fellow blogger Veronica Sicoe recently did an amazing blog on this topic. She defined it as “Transhumanism is a movement that aims at upgrading humanity through technology and scientific advancements. The idea is to enhance the human body and mind, from the development of advanced life-like prosthetics to repair damaged functionality and the development of life-prolonging technologies, to customizing healthy body parts on demand and adding new functionality, and even merging humans and machines such as by uploading yourself into a computer or sharing your neurological hardware with an AI. Transhumanism means basically anything that would make humans faster, smarter, longer-lived and more versatile than nature could ever achieve within foreseeable time.”

Science fiction provides a fertile ground for exploring this topic. War is horrible, but the many casualties returning to society have pushed science to develop more and more sophisticated medicine and technology. We now can control a prosthetic hand through thought.

What about an embedded computer in a human brain? Coming up in my next novel, I do this to a clone. Stretching to the future as my timeline extends, I am now writing about the next step in human development, evolution?, and it is exciting and challenging.

What can and will we do to extend our lives, our capabilities? And what are the moral and ethical questions that go along with altering what it means to be human. Science fiction often explores this question of, what is human? At what point do we say a downloaded brain into a computer interface is no longer human? Or do we call a cryo-frozen brain implanted into a cloned body, human? Is the identity of the original still legal? Or considered another identity entirely? How should society’s laws regulate what is acceptable or not? Should we rigidly determine what is acceptable or let science flow free to find its own limits?

And then, there is the dark side.

What uplifts us, can also destroy us. Embedded weapons can not only shoot at the enemy, they can be used for criminal activity. People can be cloned, or in desperate circumstances, donate body parts to black markets. Already many are on a list, waiting for a donated heart, liver, lung and would be willing to pay a lot to get one. Opportunity for criminal activity.

Again, the military provides fertile ground to explore transhumanism, and I have found an undiscovered gem in David Gunn’s Deaths Head: Maximum Offense.

I stumbled upon this  novel while searching through the new arrival shelf at my local library.

Yeah, yeah. I go there occasionally.

This is a part of a series, and I encourage you “balls to the wall” scifi military fans to check out the others too. 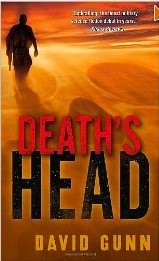 If you are all posies and flowers fantasy, this isn’t for you. But if you like a badass protagonist who is 98.2%  human with enhanced healing ability, superior strength, unusual agility and sociopathic tendencies, well then, pull up a chair and check this one out.

It reminds me of Peter Hamilton’s Mindstar Rising, only a little more gritty.

Oh yes, he also has a lethal parasite that resides in his throat that bends time and space, and talks directly to AIs. Yet most of the beings he deals with consider him little more than a Neanderthal creature.

So there are aliens that are even more transhuman that try to manipulate him…oh heck, kill him.

The United Free are immortal, arrogant, and can bring back the dead…

And do. More than once.

The other end of the Galaxy’s Spiral is home to the Metalheads or a race of cyborgs who are very lethal and aggressive.

The protagonist, Sven Tveskoeg (what is with strange scifi names?) is given an assignment to lead his ragtag unit called the Aux (auxiliaries) into the artificial world of Hekati and find a missing citizen of the United Free. What he finds is the StarFist, an enhanced military force, seriously mean inhabitants made up of abandoned miners, illegals and misfits, and a situation set up to kill him. 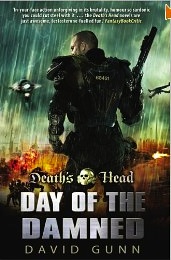 His unit contains Haze, his intelligence officer, who’s brain is cybernetic and can control computers and machines. Rachel is his sniper with deadly skills, Neen, his first officer who wants his position and Shil.

Oh yes, and a seventeen year old greenhorn colonel, Colonel ViJay, is put in charge of the group who has no combat experience whatsoever. Sven has to follow his frustrating orders until partway through the mission he realizes that ViJay is the son of General Jaxx, one of the most powerful men of the Octovian society. The situation demands that ViJay learn quickly what it means to be a soldier, or die. And Sven gets to be responsible for him.

Worse than that, Sven’s gun is sentient, a free citizen that constantly backtalks at him using heavy sarcasm.

I did say gun.

All makes for an interesting, and riveting transhuman experience in the military genre.