If the name Ison means nothing to you….then you need to read on.

If it does, then you might want to read on anyway.

Ison is the name of a spectacular comet that has entered our solar system and is headed toward the sun. On November 28, 2013, it will approach perihelion with the sun (closest point: 700,00 miles above the surface) and one of three things will happen:

It will survive and head out towards Earth, it will break up into pieces like the Schumacher-Levy Comet did, and pieces of it will continue towards the sun, or it will disintegrate completely due to the sun’s enormous gravity and heat. It may not survive…

This exciting event happens just around the time of the launch of my sixth book, Touching Crystal, and yes, Chapter One starts with a comet streaking  out from behind the sun and crashing into Thanos, Alysia’s smaller moon. Richard Steele and Trace Walker have to cope with the aftermath of changing weather and disrupted economies. But more than that, there’s alien crystals and invaders involved.

I would like to say that I planned Comet Ison coming at this time, but of course, I didn’t.

Here’s an interesting link on 12 cool facts about Comet Ison.

It’s less than two miles across in the rocky core…1.2 miles (size of Manhattan) and shrinking as it casts off huge amounts of gas and water. The tail is five million miles long and the coma (front part) is 100,000 kilometers in size. The tail has recently split into possibly three tails and the front has sprouted “wings,” which indicates that pieces may have come off.

If it does survive the sun and comes around out of the backside, it could reach a velocity of 225/sec or fast enough to cross the Continental US in twenty-five seconds. 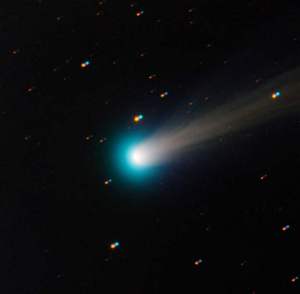 The closest it will get to Earth is on December 26 (hmmm…) at forty million miles away. (phew!)

We should be able to see a spectacular show, and even now, it’s brightening up enough to be seen with binoculars and the naked eye at certain times.

Then, once it’s gone, it’s gone forever. It’s called a Perihelion Comet and they don’t come back.

So be alert, and check the skies for a once in a lifetime event.