If you’re a writer and you haven’t seen this link yet, you should. It takes a look at the current trend for author dollars, showing with hard data that traditional publisher ebook sales are declining while self-publishing and small publishers are increasing. Even more interesting is where the data comes from and how sometimes the media gets it wrong.

If you like colorful graphs, lots of numbers, and care about the money flow for authors, check it out.

Another link I want to mention is to an article on nano advances at the molecular level. This is current hard science, that I consider back up data, which says nanobots in the bloodstream that can target viruses or cancers is a total possibility for the future.

And since I’m currently writing about this as a medical approach, I wanted to mention it. Sometimes while I’m writing, real life jumps out and highlights what I’m writing. It happened with the meteor striking Russia practically to the day I wrote the beginning of Touching Crystal.

No one has created a time gate, but as I pointed out in a previous blog, I have had dinner next to a physicist who is working on time reversal at the sub atomic level.

And…recently, Kurzweil’s newsletter came out with an article on creating wormholes. I think I’ll suggest a wormhole that lets my lost fleet jump several light years across the universe. However, I’m not the only science fiction writer to do this. It’s been used often enough in fiction that it seems it should be a forgone conclusion by now.

I’m also writing about clones. Or will be again. The main character in my very first book, Caught in Time, Rowyna, is a clone. Did you notice the name Rowyna is a rearrangement of Arwoyn? Then, my novel Someone’s Clone also tells the story from a clone’s perspective.

I found there aren’t many books that use this viewpoint. The Fifth Head of Cerberus by Gene Wolfe comes to mind as a favorite, and recently on a must read list was Pamela Sergeant’s Cloned Lives. I attempted to read two others books on clones, but because of various flaws in the books, I abandoned them.

I am reviewing Sargent’s book because it follows the lives of the main character’s five clones in an effort to show how environment affects personality and how different aspects of Paul Swenson’s personality emerge differently in each clone. Sargent also addresses the prejudice that society might harbor towards such an act, asking the question of how far should government let science progress when it could threaten society.

While all this was interesting, the part I enjoyed most was Sargent’s portrayal of the world of 2000 to 2037 because I could compare reality with her fiction. Published in 1976, Sargent sees the world of 2000 with automatic highways. The book drags, however as she goes into too much detail about why things are the way they are, almost delighting in her predictions.

She has high speed trains, which the government subsidizes, competing with airlines While airplane travel supposedly is more economical and efficient, Paul and his traveling companion wait an hour due to a mechanical breakdown in the airline’s luggage conveyor. Then the train from the airport is halted because of a riot by a group who claims the end of the world is near and clogs the track.

Such are her pointed comments on the far future, now our present. 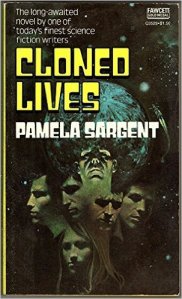 In Cloned Lives, a moratorium on genetic research, legislated in 1980, has recently expired. Paul’s best friend, Hidey Takamura, is a genetic scientist who moves swiftly to make his mark at the university where both men work by convincing Paul he should be cloned. When a nosy reporter discovers the clones, all hell breaks loose and Paul and the new clones are hounded by the media. Government quickly slaps on another moratorium, and Paul hires a couple to raise the five kids.

The book leaps to 2016 and Paul is offered a research position on the moon where scientists have established a presence. Also mentioned are microfiche readers taking over physical books. That part she was close to the mark; the colonization of the moon, not at all.

The clones are sixteen years old now and painfully teenage. Unexpectedly, Paul is involved in a crash on the moon and the clones are informed that he has died. For the next five sections of the book, Sargent takes a point of view of each clone, analyzing similarities and differences of personality as their lives progress. Here is where the book breaks down into too much internal dialogue of teenage and young adult angst. Each clone has difficulty making social connections, and after a while, I got tired of the whining.

As the book winds up to a surprising ending, the clones eventually get married, find new relationships, and embark on their separate tortured lives.

I struggled to finish, but Pamela Sargent is a well-respected author and the subject matter was interesting. The storyline is strong, but Sargent bogs down in too much internal emotion and characters who should have been so much more than they were portrayed.