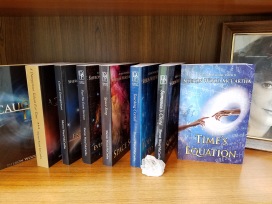 I’m accumulating lots of lovely ebooks in my library. I used to spend a lot of effort tracking down good science fiction or fantasy by asking friends, researching award lists, or cruising libraries. Now, due to various ad sites, I find lots of interesting ebooks. I stash them away, expecting to read them some day, and often I get around to them. I’m not alone in this behavior. I select them because I sincerely plan to read them.

Many of the books are from new authors who I have never heard of before or who are not on some award list. It’s like dating. You need to find interesting guys to date, but they don’t just show up on your front steps if they have no idea that you exist. You have to get out there where the guys are, but a bar is not the best place to find a good date, much less a life partner. So these various ad sites set certain standards such as requiring at least a 4.0 star review rating or a given amount of reviews. They curate the book for you by genre so you can hone right in on what you like, but still make it easy e 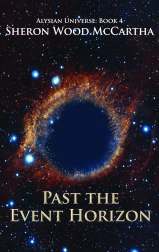 nough that a shy new book can qualify and be accepted to the dance.

Am I stretching the metaphor too much? You get the idea.

So to meet the readers who are compatible, I’m offering one of my books again via FreeBooksy, but this time
Past the Event Horizon is the book at the dance. There are 90,000 science fiction readers subscribed through Freebooksy, and Past the Event Horizon will be there waving “Hello” on Friday May 12th. However, not to be shy, I have also scheduled the book free through the KDP Select Platform starting TODAY and extending through Monday.

Past the Event Horizon is a thrill ride through space as the twelve person crew of the spaceship The Seeker follows an alien signal through a star gate onto an alien world. What they find and how it changes them makes for an exciting story.

It’s rare that I offer this one free, so grab it while you can.

This month I’m highlighting a few ad site books starting with Accord of Honor by Kevin McLaughlin. It’s been over three years since I noticed Kevin on the Linked-In chat boards. He offered expert advice to an ignorant author who was desperate to learn all she could. I appreciated his willingness to share information for free on self-publishing. So, when I saw his book Accord of Honor, and it was an interesting space opera, I snapped it up.

Accord of Honor is a fast-paced space military adventure. The Lunar Accord has banned all individuals or nations from arming space ships for war. But Ex-Admiral Nicholas Stein knows the peace will not last, and in secret, he exiles himself on Mars to build ships with on board weapons that could result in treason and execution if he were discovered.

Then, outof nowhere, armed ships appear, attacking vulnerable space freighters and kidnapping their crews. Soon they threaten a helpless Earth and call for its surrender. Only Admiral Stein and his son, Thomas, with their weaponized ships stand in the pirates’ way.

Accord of Honor carries political overtones similar to the Expanse Series with friction occurring between Mars,

It is the first book in the Accord Series followed by Accord of Mars and the recently published Accord of Valor.

While the women are out for Mothers’ Day, relax with two new space adventure series at great prices. Or… If she’s a science fiction enthusiast like me, sneak a few new books onto her ereader and watch her smile.

5 responses to “A Self-Publisher Markets”