Writing science fiction often takes you off into the weeds of future speculation. When I took on the Terran Series and started writing A World Too Far, I had to figure out how many people and ships would be traveling. I also had to state a reason for the mission.

I didn’t want the reason to be that the Earth was annihilated or destroyed. I hope that as time goes on we do things better and more efficiently. Stephen Hawking says that we need to expand out from Earth in order to survive long term. The “Not Everyone in the Same Basket” theory. I think we have enough people like Elon Musk that we don’t need a catastrophic event to push people out into space. So I made the reason for the expedition the fear that humans need to diversify to other planets in order to survive…and the plain old human drive of seeking adventure and new worlds.

Okay, how many then? Two names kept cropping up. One was John More who said 160 was enough. Local Portland University anthropologist Cameron Smith said 14,000 to 40,000.

Estimates of the minimum reasonable population for a generation ship vary. Anthropologist John Moore has estimated that, even in the absence of cryonics or sperm banks, a population capacity of 160 people would allow normal family life (with the average
individual having ten potential marriage partners) throughout a 200-year space journey, with little loss of genetic diversity; social engineering can reduce this estimate to 80 people.[6] In 2013 anthropologist Cameron Smith reviewed existing literature and created a new computer model to estimate a minimum reasonable population in the tens of thousands. Smith’s numbers were much larger than previous estimates such as Moore’s, in part because Smith takes the risk of accidents and disease into consideration, and assumes at least one severe population catastrophe over the course of a 150-year journey.[7]

Estimation of a genetically viable population for multigenerational interstellar voyaging: Review and data for project Hyperion

I find that previously proposed such populations, on the order of a few hundred individuals, are significantly too low to consider based on current understanding of vertebrate (including human) genetics and population dynamics. Population genetics theory, calculations and computer modeling determine that a properly screened and age- and sex-structured total founding population (Nc) of anywhere from roughly 14,000 to 44,000 people would be sufficient to survive such journeys in good health. A safe and well-considered Nc figure is 40,000, an Interstellar Migrant Population (IMP) composed of an Effective Population [Ne] of 23,400 reproductive males and females, the rest being pre- or post-reproductive individuals. This number would maintain good health over five generations despite (a) increased inbreeding resulting from a relatively small human population, (b) depressed genetic diversity due to the founder effect, (c) demographic change through time and (d) expectation of at least one severe population catastrophe over the 5-generation voyage.

That’s quite a range.
What to do?

I started with sixty ships with two hundred per ship that worked the ship and two hundred in cryo. But then as the ships approached the designated planet, a population campaign increased the live colonists to five hundred per ship, give or take. That put us in the range of thirty thousand along the lines of Cameron Smith’s estimate.

Besides, I liked Babylon Five, the TV series, and wanted several ships on the journey for diversity and interest.

When the target planet was found toxic, forty ships decided not to land and jumped away. Of course, problems started happening immediately and the population underwent a severe reduction.

I needed a more manageable number of characters. I was trying to read The Dark Between the Stars by Alan Dean Foster and too many main characters overwhelm a reader. I got overwhelmed and didn’t finish the book.

Now as I’m writing the next stage that deals with survival on a space station and alien planet, numbers again play an important role. Only so many can fit on station, and those stranded on the orbiting ships create a nice tension to those on planet that don’t want a horde of aliens invading their home and try to keep them on the station or ships.

Readers often don’t realize how much science fiction authors need to balance science plausibility with attention-keeping fictional plots and often wander off into the weeds of research.

Or maybe they do. Maybe they require it. 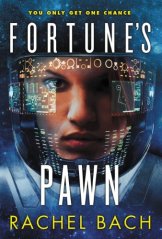 This week I read Fortune’s Pawn by Rachel Bach as it is a Powell’s science fiction readers group selection. I really enjoyed it…so much so that I’m now reading the sequel Honor’s Knight.

Devi Morris is a super gung-ho mercenary from the military planet Paradox where the king reigns supreme. The universe is full of inhabited planets and ships travel all over via jump technology.

However, there is an unknown dangerous threat lurking at the edges of the universe.

In order to accelerate her career, she has taken a job in a beaten up trading ship called The Glorious Fool. The ship has a dangerous reputation but it’s rumored to be a fast track to the rank of Devastator, the name of the king ‘s elite guards, a rank Devi aspires to.

On board, an interesting assortment of aliens form the crew. The navigator is a cranky aeon, a birdlike species; her doctor is from a race of crablike insects that are enemies of most humans, and the cook, Rupert, well, he’s incredibly handsome and nothing like he seems.

Actually, nothing is as it appears and soon Devi is wrapped up in secrets that are world

shattering with the real possibility of not surviving her tour.

But she’s a stubborn, resourceful, and surprisingly capable mercenary who soon finds herself with a few deadly secrets of her own.

Fast page-turning action with a passionate love story makes this one of my favorites, and one I recommend.