But still gratifying for all the hard work involved.

My heartfelt thanks to enthusiastic science fiction fans that have read my books, and especially to those who have left great reviews. Such is the lifeblood of an author. 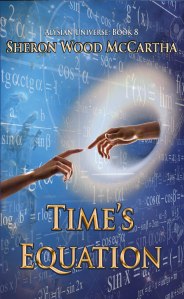 More exciting news is that the proof for Time’s Equation is on its way, which means by the end of November the latest book in the series will be published. Here’s a short summary:

“Tempest Steele vows not to fall  again for the charms of Kayse Telluria, but when a murder occurs, and he is a prime suspect, he  jumps through a time gate in an attempt to track down the culprits.

Not thinking of consequences, she follows him to find a disturbing future and creates even more problems. But a math equation may be the answer, if only they can solve it and set the future back on the right course.

It won’t be as easy as it sounds.”

With all this happening, I did manage to read Ancillary Sword this past week. I have decided that if I start a series, there’s no problem in reading books in the rest of the series. I wanted to read a popular science fiction novel. This got nominated for the Hugo for best novel in 2015. 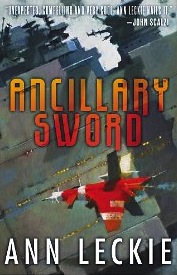 I really enjoyed it, but be aware that Ann Leckie uses the feminine pronoun in all cases and it can be annoying trying to decide whether the current “she” being discussed is feminine or masculine.

Having said that, it’s really cool that the viewpoint character named, Fleet Captain Breq Mianaai is a soldier who used to be a warship.

As the warship Justice of Toren, Breq controlled thousands of minds, but even though in one body now, she can access her crew while carrying on conversations on station and also monitoring events down planet. Even better, she carries on dialogue with her current ship Mercy of Kalr, and Athoek Station revealing that ship and station AIs have emotions…and strategies for getting what they want.

Anne Leckie plays with the idea of human emotion affecting machine intelligence and the relationships of humans with self-aware AIs.

Breq is sent by the multi-bodied emperor, currently at war with herself, to the only place she would agree to go and finds that Athoek Station and the adjoining planet are morally corrupt. Bodies from conquered races are being put in cryo chambers and sold into slavery for a profit, even though forbidden. Straightening the mess out impacts Athoek’s strongly ingrained culture and proves not to be easy.

The first in this series: Ancillary Justice was nominated for every major science fiction award in 2014 (won the Arthur Clarke, Nebula, British Science Fiction and was short listed for the Hugo)

You might want to also enjoy Ancillary Sword, the follow up, and look for the next in the series.