Recently my brother requested a good book on time travel.

Now, I know one of his favorite scifi books is Dinosaur Beach by Keith Laumer because of the time travel element where future impacts the present.

And Caught in Time...because, well, I wrote it. (See right panel)

My favorite time travel novels are Connie Willis’s To Say Nothing of the Dog and Blackout/All Clear. (All won Hugo’s)

But his request fit in perfectly with what I was reading and getting ready to blog about.

One of the books I picked to read this year was Timebound by Rysa Walker because it won the 2013 Amazon breakout novel award and the blurb sounded interesting.

I am noticing that first person point of view is popular in “New Adult” fiction (30ish) and Timebound follows this trend. So you are in the modern day viewpoint of a teenage girl. 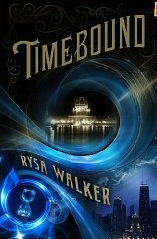 Named after her two grandmothers, Prudence Katherine goes by the name of Kate. (What teenage girl would do otherwise?) Her mother and father are separated, but speaking to each other, when her grandmother breezes into town, announcing that she has a brain tumor and asks that Kate and her mother or father move into the home she has just bought. Kate’s mother refuses, but her father moves in. Also at the house is a male friend and employee of Katherine’s called Conner and an Irish setter called Daphne.

While moving into her new digs, Kate notices a glowing blue medallion her grandmother puts out on the counter. However, it soon becomes apparent that only she can see it’s blue glow. Touching it draws her into a strange dimension where briefly she sees a handsome dark-haired young man who calls out her name before she is pulled back into the kitchen and passes off the experience to her father and grandmother as a dizzy spell. But grandmother Katherine knows better.

Katherine has a serious agenda, and that is to introduce Kate to her genetic ability to time travel using the medallion in order to prevent a murder and the changing of their timeline.

Kate is not the only one in the family to have the ability. Years ago her mother’s twin sister, also named Prudence, and Kate’s grandfather were killed in a car accident…supposedly. Prudence’s body was never found.

Turns out Kate’s grandmother was born in 2282 and went on to work as a historian for an operation called CHRONOS that sent out time travelers to research certain historical facts. She becomes involved in a charismatic traveler named Saul who sees an opportunity to manipulate the organization and set up a power base through a religious movement. The company’s main operation center gets blown up, stranding all time travelers in various timelines.

In this story, the timeline that Kate travels to is the Chicago Fair in 1899 where an attempt is made on Katherine’s life that changes Kate’s current timeline.

There is some confusion as changing the past, changes the timeline and Kate’s mother vanishes and Kate finds her father in a different life with a different family. This upsets her, but the bonus is that she meets a boy named, Trey, who believes her wild story of timelines changing and helps her try to put things to right.

Life becomes dangerous as others traveling the timelines do not want her to succeed.

An adventure in 1899 at the World’s Fair is the main focus of this novel where Kate tries to figure out what she needs to do to fix things.

While this is a Young Adult novel, I did like Kate experiencing the changed timeline and some of the danger she encounters. This definitely is the first in a series as many questions still remained unanswered.

However, my daughter would like this story much better than my brother. The writing is good, but the teenage developing romance and emotions, she would like, and he, not so much. 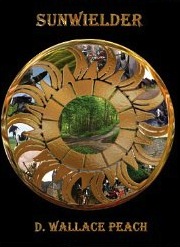 That said, I think Sunwielder by D. Wallace Peach is right up his alley.

This story takes place in a land on the brink of war in a more medieval setting. Gryff Worden finds his family slaughtered in his farmyard. Mortally wounded, he stumbles upon a strange old woman who is a timekeeper. She offers him a Sunwield, a medallion that can return him to the critical choices that shape his life. He gets a “do over” as the medallion repeatedly brings back moments that determine life and death, or pivotal choices on his life’s path.

An intriguing concept of time travel shaped by the competent writing of this author makes this a book worth reading.

What if you could change certain critical moments in your life? How would it affect the rest of your life? A word in anger not said, a chance meeting missed or made that led you to finding a spouse?

And…is your life shared with a constellation of others that resonate with you through multiple timelines?

I’ve been wanting to read a book like this and now it’s here. Both books use medallions as the instrument that enables time travel, but in very different ways with very different people.

What is your favorite time travel book? I’ll pass it along to an eager reader..my brother.