Best Selling Science Fiction: Is there a generational bias?

I’m more than half through the Quantum Thief and the thought occurred to me that maybe there is a generational bias in science fiction. This book has been recommended several places and was put in my Goodreads science fiction reading group’s list. So, I started to read it.

What I’m finding is that the quirky cyber punk style is irritating me. Stories at the beginning jump around and I have to stop and try to figure out what is going on more times than I like. And whether it’s reality or some sort of virtual game. Still there is a detective story involving the death of a chocolatier that is downright tasty. Gradually the stories are being woven together and hopefully soon I will make sense of it. I might even like it.

So I put it down when my order for Captain Vorpatril’s Alliance came through. Lois Bujold has won more awards in science fiction than most writers and for good reason. I couldn’t put the book down and my Christmas duties took a dangerous set back. Family relationships were imperiled. 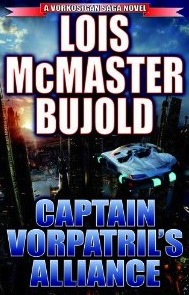 Bujold has a deft way of taking characters, putting them into impossible situations and watching them jump. In the story, the perennial bachelor, Ivan Vorpatril, cousin to Miles, is known for his late night carousing and commitment phobia. He’s the handsome, charming cousin, that doesn’t have the thinking power of Miles, even though he is Barrayer royalty. So when he’s off world, the local Dome police are breaking down his door to arrest him for kidnaping a young gorgeous female and blue female construct companion who are running for their lives. Along with the pounding police are off world enemies bound and determined to destroy her family and want to extradite her for nefarious purposes. All because he loyally did a favor for his cousin, Byerly Vorrutyer, secret spy and political manipulator, by asking a beautiful girl out for a date….

And ended up tasered and tied to a chair.

Not a positive response for a first date, but when assassins show up and he overcomes them, she accepts his stuttering invitation to hide out at his place.

Talk about pick up lines.

So what does he come up with as the door is cracking? And the girl is eyeing his high balcony, threatening to jump in order to avoid interrogation?

He asks her to marry him…temporarily.

Because on Barrayer, the custom for marriage consists of certain sworn words and dancing on oatmeal. So while the door is splintering, he talks her into a temporary marriage contract to protect her from her enemies and get him out of an abduction charge, and trouble back home with Gregor, the king.

Little knowing that she is Akuti Tejaswini Jyoti ghem Estif Arqua, daughter to a ruling house at Jackson Whole that has just been attacked and usurped by a rival house.

And that’s just the beginning. While these two keep telling each other it’s only temporary, we know better and watch the hysterical developments both romantic and political unfold.

The story was clear, the action non stop and I couldn’t help laughing so loud that I almost fell out of bed at one in the evening. Or was it two?

Am I a generational reader who just likes a clear story with defined characters and a plot I can understand?

5 responses to “Best Selling Science Fiction: Is there a generational bias?”