Does Science Fiction predict the future?

I love science fiction because it tries to look into the future and see what might happen. That’s why I write it. I strain to peer into the might-be future of tomorrow and let my imagination soar.

But when I think of what I have read over the decades, I feel that most science fiction stories have missed the mark. 1984 by Orwell for example. (thank goodness that future didn’t happen). The Moon is a Harsh Mistress by Heinlein. The poor moon may be called an abandoned mistress in today’s world, although we have paid her a visit. And where are the flying cars? The teleportation stations? And weren’t we supposed to have cold fusion, or solar energy running the world by now? Electric cars? It’s out to freaking 2012 people!

A current television series that I highly recommend is called “The Prophets of Science Fiction” and is narrated by Ridley Scott. It answers this very question, and I was surprised at how many hints I had missed in various books.

Arthur Clarke was an author who was very interested in future technology. His books reflect this scientific bent and tend to be a bit dry for my taste. While 2001: A Space Odyssey takes a manned ship to Jupiter, in reality, we can’t seem to leave Mother Earth. On board, it carries Hal, a very human (and flawed) super computer.  Clarke’s Hal operates and guides an interstellar ship, while our current version of Hal (IBM’s Watson) recently won a million dollars competing on the game show, Jeopardy. Anyone see any irony here? In the film, the data for storing all of Hal’s memory was a holographic data storage file, which is what my husband’s company is currently working on perfecting. So that may soon be predictive. Clarke also wrote Fountains of Paradise that postulated an elevator to space using a geosynchronous orbit to stabilize it in one place. We have no space elevator today, but we have an array of satellites that are stationary because of their geosynchronous orbit. So close, but still a miss.

Here and there are odd bit and pieces in many science fiction stories that are cropping up in our current time, but no grand sweep out to the stars yet. Our biggest accomplishment is bouncing two rovers onto Mars and driving them around to pick up data. The mission is still going, however, far past the expected end date. 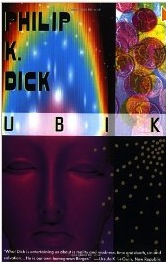 Another author that the show mentions is Phillip K. Dick, who seems to have been quite paranoid and because of early drug use had a blurred vision of reality. The first book that I read was Ubik. It was my first introduction to the concept of virtual reality. Nowadays, personal privacy, virtual reality and computer hacking are serious issues. London has cameras at every street corner looking out for the criminal element, teenagers and adults all over the world spend more time in a fantasy world at the computer than in their own reality, and viruses and computer hacking are daily threats. Does anyone else find it ironic that a paranoid scifi writer may be the one to guess the future most accurately? 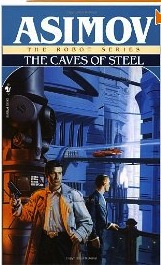 Isaac Asimov wrote the robot series I Robot, and Caves of Steel, and the Foundation Series. While we haven’t been able to predict the future using mathematics, we are getting close to human-like robots. Movie studios and science labs have already created robots that show expression and respond in  very human like ways.

More and more we are relying on Artificial Intelligence to drive cars, turn out lights, clean floors, organize our lives. We still don’t have a robot that can pass the Turing Test, but Ray Kurzweil says that will be coming in 2029…not that far away.

So what about science facts that seem like science fiction? Unbelievable science that is happening right now?  I suggest you check out Ray Kurzweil’s The Singularity is Near.  He defines the Singularity as: “The singularity is a future period during which the pace of technological change will be so rapid, its impact so deep, that human life will be irreversibly changed.” This book will astound you. It’s not science fiction, but what is happening right now in science labs across the globe…science facts…today. Over one hundred pages of footnotes at the end and some very technical and heavy reading. So, be prepared. His predictions are mind boggling…immortality in twenty years, robots more human than human, energy resources, nanobots for internal health, DNA, the whole amazing works of what our future might look like near terms, and far out.

It must be said that I read also for the story, knowing full well that the predictive future of a book is shaky at best. I like to soar among the stars and encounter alien beings knowing that this won’t happen in my lifetime, or anytime soon. The government is reducing their SETI budget and alien beings seem far off at best. Yet, with the Hubble telescope, the planet searching Kepler telescope and the James Webb Telescope due to launch in 2018, we are out there exploring space bit by bit, and finding amazing new things.

Science fiction writers sometimes try to predict the future, but the future is an elusive and tricky thing. Very often it surprises.

2 responses to “Does Science Fiction predict the future?”