Christmas might be the time of fantasy and dreams, but we need to balance out all that airy fairy stuff with some good science fiction military genre recommendations. I know the guys out there are ready to march to a different drummer and have I got two for you. Hup! Hup! HUP!

John Scalzi is the first.

I had mentioned him in a former website, but not here, so for all you new readers…I want to toss out his name…and Richard Morgan’s also. Gear up soldier and check out: Old Man’s War, (Hugo 2006) The Last Colony, (Hugo 2008) Zoe, (Nominated Hugo 2009) The Ghost Brigade, (Hugo 2007) (and his latest–Fuzzy Nation.. An impressive array of awards for the series. Right now Fuzzy Nation is next up on my to read and I’ll report back my opinion in a few weeks.

The premise of Old Man’s War, and the following books of the series, is that the military, in secret, takes the minds and personalities of the aging Earth men and downloads them into new buff military bodies to go out and fight the alien menace. They cannot return, however, as all ties to Earth are broken in the procedure.

There is a bit of an identity crisis here, but as a mature person, I could get used to a new, attractive, healthy body in a nanosecond…while keeping the same mind, of course. Or even an upgrade there might be nice. Of course becoming fodder for an extraterrestrial war…not so much.

Richard Morgan is the second recommendation.

Richard Morgan has a similar idea in his series. His man is a more of  a specially designed envoy, however, and he gets “resleeved” more than once in the course of the series. Morgan provides a grittier story and if you have little girl sensibilities, this isn’t for you. But if you like fast-paced action military fare, then dive in. 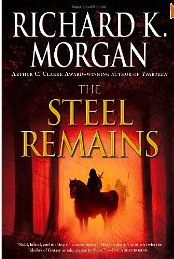 In both cases, fighting aliens is life threatening whether in the military or not. Of course, if your “cortical stack” gets saved, you can just resleeve into a new and better body.  Other books in this series is: Thirteen, Woken Angels, and the Steel Remains. Altered Carbon won the John Campbell award 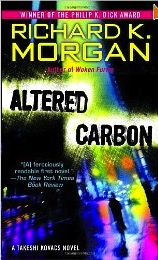 Richard Scalzi is a prolific twitterer and I suggest you follow him as his comments on life are funny and informative…okay, mostly funny. He has a wildly popular blog at: http//www.whatever.Scalzi.com.

In his case, blogging and tweeting seems to have increased his popularity. In September, I attended a talk he gave at Powell’s bookstore here in Portland. As soon as I sat down, a gentleman handed me the new hardback of Fuzzy Nation and whispered that Scalzi would personally sign it for me. At a list price of $25, I almost handed it back. I don’t usually pay the big dollars for reading. I looked for a paperback version and it was not to be had. Only earlier books could be found in that format. Clever marketing. Still, the talk that Scalzi put on was very entertaining and worth the price of admission.

So, here’s a popular author hitting all the cylinders…blogging, tweeting and face to face…and it seems to be paying off for him.

Oh yeah, and writing a really good book helps too.

Please notice that I have figured out how to do the WordPress sidebar and so I have put up my published books in my series The Alysian Universe. I had planned to have Cosmic Entanglement out before the holidays, but no matter how hard I try, life keeps intervening and it looks like more towards the end of December, early January now. Patience they say is a virtue.

Not one that I happen to have, however.